It is nearly five years since I started a monthly neurosurgery clinic in south west Victoria. Over the years, the clinic has moved from Portland to Hamilton, expanded from one to two days per month and is now drawing patients from Mount Gambier as well as surrounding Victorian towns. Most significantly, I can now provide operate on patients locally. In fact, the move to Hamilton was prompted by an invitation from Jim Fletcher, the former CEO of Hamilton Base Hospital, to perform elective neurosurgery at the Hamilton Base Hospital. This was not a trivial decision on the part of Mr Fletcher because it required the hospital to spend a large sum of money on purchasing equipment that I need for my work: an operating microscope and specialised operating instruments. The microscope was purchased using a bequest from the McBride family 18 months ago. Even though I have had to limit the types of surgery I can do at Hamilton to simple spinal and peripheral nerve surgery, it is fantastic that people in Hamilton and surrounding regions do not necessarily have to travel all the way to Melbourne or Adelaide in order to be relieved of very painful spinal conditions. Country folk are rightly reluctant to drive into Melbourne or even Adelaide to face the high traffic volumes and frequent traffic snarls. Naturally, they also want to stay close to their families. I have previously spoken of how I enjoy my visits to Hamilton Hospital. It gives me even more pleasure to visit the Hamilton hospital ward to see the patient(s) I have operated upon, beaming happily. I want to acknowledge that it is very much a team effort that makes all this possible: I could not do what I am doing at the hospital without the strong support I receive from the hospital, volunteers, the nurses, the junior doctors, anaesthetists and general surgeons.

Why don’t more rural centres have the facilities to provide elective neurosurgery? As far as I know, Hamilton Base Hospital is currently the only rural Victorian hospital where any neurosurgeon performs spinal surgery. Even in emergency situations, the big public hospitals in cities like Ballarat and Geelong have no capacity to provide neurosurgical treatment but instead have to transfer patients to Melbourne hospitals. I know that in coming years, big organisations like Epworth and St John of God will be opening up private hospitals in Waurn Ponds and Geelong respectively but that will still leave uninsured rural patients disadvantaged compared to their metropolitan counterparts.  It seems to me that rural towns and cities have been willfully and wrongly neglected by successive state and federal governments, not just in the area of health services, but in infrastructure and public transport, to the social and economic detriment of rural communities. As Victoria’s population swells in the coming decade, I hope that this oversight will be effectively addressed. 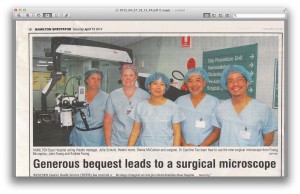