This is a patient who I will always remember because she was so close to death but fought her way back to life with incredible strength of will. She was 40 years old when she was referred to me after being found collapsed at home in a barely conscious state. She soon became comatose and was taken for an urgent CT scan which showed that she had had a nasty haemorrhage (see just below and to the left) from a large aneurysm (of the middle cerebral artery) that probably measured over 2 centimetres. There was no time for a preoperative angiogram. I took her straight to the operating room to suck out the blood clot and clip the aneurysm. Due to the size and complexity of the aneurysm, I ended up having to use 8 titanium clips to completely cut it off from the circulation. You can just see the shadows of these 8 clips clustered together if you look carefully at the angiogram picture just below and on the right. The lady then spent two weeks in intensive care in a very critical condition but her family said that she was a fighter and so she proved to be. Once she turned the corner she made an incredibly rapid recovery and was walking and talking before anyone thought she would. The last I heard, she had gone on to marry her long time sweetheart and had returned to her university job. 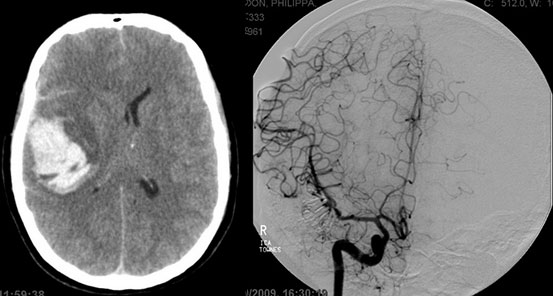 A 60 year old man saw his GP after suddenly and uncharacteristically forgetting how to get home while he was driving the car. His GP sent him for a CT of his brain, which was reported to be normal. However the GP was still suspicious that the man had some problem in his brain so it was arranged for him to have an MRI. The MRI revealed a deep and extensive tumour. The GP contacted me immediately and I in turn arranged to see the man the next day. During the consultation, I explained the MRI and the treatment options. My experience told me that the tumour (seen as the white area on the first image below) was most likely to be highly malignant and it’s location made it impossible to surgically remove without a very high risk of permanent loss of normal brain functions However I advised that some of the tumour could be removed with a fine needle so that it could be accurately identified and appropriately treated with chemotherapy or radiotherapy. This was a risky operation because of how deep within the brain the tumour was. Immediately below are some photographs from the operation, which was performed with the aid of a sophisticated computerised tracking or neuronavigation system called “BrainLab”, so that I could hone right in on the tumour from a tiny hole in the skull. The surgery went smoothly and diagnostic tissue was obtained. Of interest, the use of BrainLab is now widespread throughout Australia but ten years ago, I was responsible for organising the introduction of BrainLab to Melbourne Private Hospital, where it was used in a neurosurgery operation for the first time in Australia.. 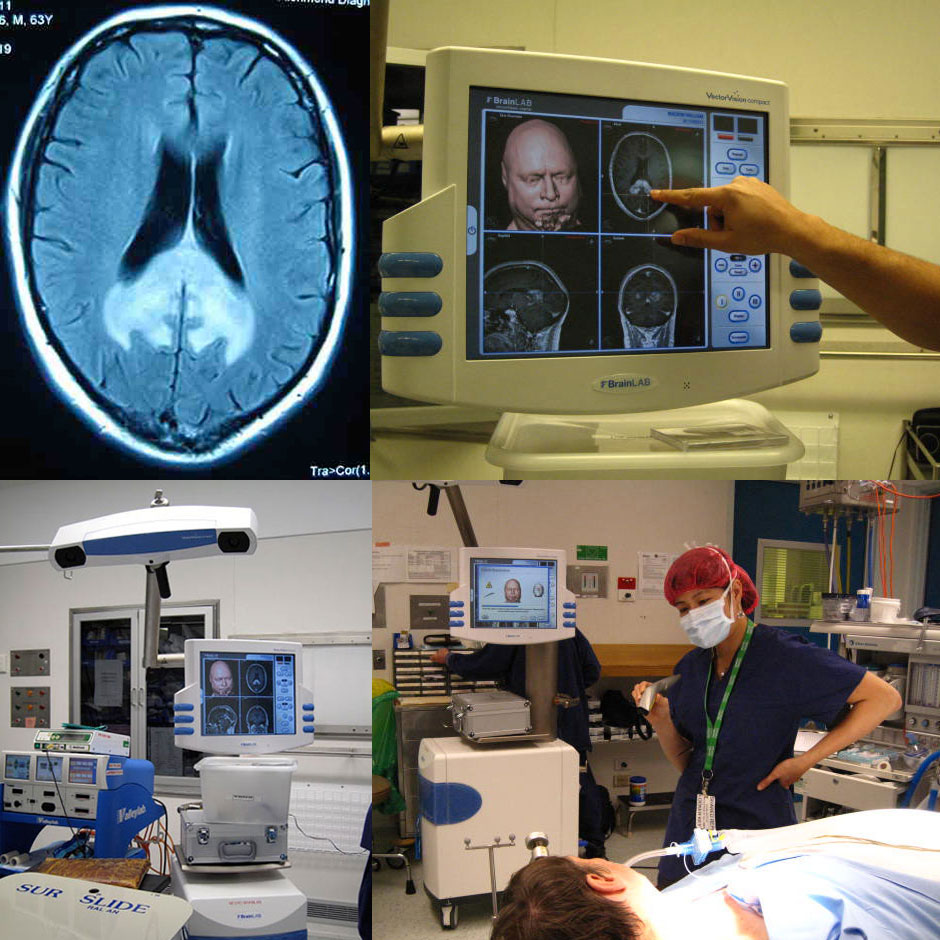 A very large tumour in an elderly lady

A surgeon often has to consider many factors when deciding whether or not to offer a patient surgery. Chronological ge is one of those factors, as the risk of surgery is generally regarded as increasing with age and also because elderly people do not tend to recover nearly as well as young people do after a major illness. Sometimes though, it pays to be open-minded and give elderly patients a chance at major surgery. This was certainly the case with this 84 year old lady who was half-heartedly referred to me by a young hospital doctor one evening. She had been languishing on a medical ward with paralysis on the left side of her body and a deteriorating conscious state. It was presumed that she had a stroke and her physician felt that there should be no active treatment because of her age. However her daughter insisted that the doctors do a CT scan, which revealed a very sizeable haemorrhagic tumour causing great distortion of the normal symmetry of the brain (upper panel just below). So the junior doctor was told to ask me if I would be interested in operating on the lady, the assumption being that I would probably say no. I decided that I would go and meet the patient and her immediate family. At that time, she was drifting in and out of consciousness and was barely moving her left side. I knew that if nothing was done, she would certainly die from pneumonia or respiratory failure. Her family told me that she had led a very active life and that her mind was as sharp as a tack up until she had recently and suddenly taken ill. In other words, she behaved like someone younfer than she was. The family also told me that she was a determined lady and would want to be given a chance. After considering all the information, I decided to take her to theatre late that night and removed the tumour. I must say that the anaesthetist was not enthusiastic about my decision. It was therefore gratifying that the lady improved immediately after the surgery, although for the first week or two afterwards, she was mildly confused and kept saying that the prime minister had operated on her! However she was discharged within 4 weeks after surgery, and when she came back to the hospital to see me she had her white hair perfectly blow-waved, was walking without any aids and held an intelligent conversation about her plans for the future. Anyone who did not know better would have been surprised that she had recently had an operation on her brain. The post-operative MRI (lower panel of images just below) was also very pleasing, with no evience of residual tumour and almost complete restoration of the symmetry of the brain. This case exemplifies to me that there are some situations when a patient’s chronological age should not determine the medical treatment. 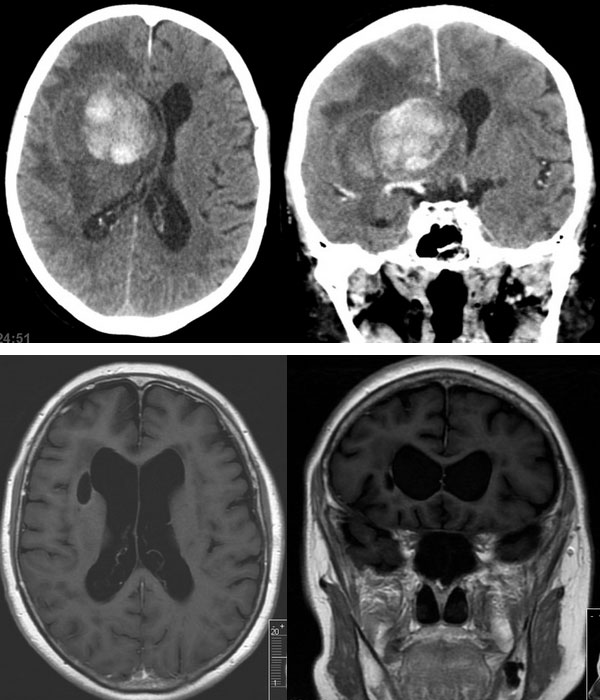 This is a case of a very athletic young man who had been come off his bicycle 16 years ago after being struck by a passing car. In the years that followed, he developed increasing neck and upper limb pain, numbness and weakness. He became very concerned when he noticed that his right triceps muscle was wasting away and he could not play his guitar. An MRI of his neck (see images on the left below) revealed that his spinal cord was severely compressed. He consulted with four different neurosurgeons and each gave him a different recommendation. Ultimately he decided that I would operate on him. I drilled out two of the vertebrae in his neck to relieve the pressure on his spinal cord. He is doing well with good relief of his pre-operative symptoms. The post-operative CT (see image on the right below) demonstrates the extent of the surgery and the extra room created for his spinal cord. 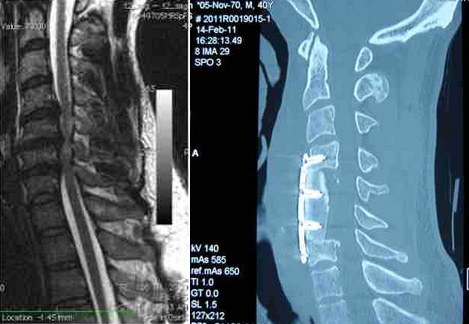